Jumping Off the Bridge

Everybody else is doing it, so I'm doing it too.

Todd & Pony have a My Space page. Pony did all the work on it (as usual).

Sorry I can't blog more but I have to go do a podcast now.

And, no, Rosie wasn't fired. I have an inside source!
Posted by Unknown at 6:27 PM No comments:

I have five minutes to post if I am going to be to work almost on time.

This weekend I got to take care of my dog, Bonkers. I haven't seen him in years, because my ex, CT, kept him when we split up. I have some wonderful pictures of him and will try to post those tonight.

Bonkers is around 16 or 17 years old and has three teeth left. I had to hold his torso for him when he squatted to do his business in the yard because his legs are too weak. To say it breaks my heart to see him so old is an understatement. But all of us are headed down that path, and I struggle towards acceptance because I know that wishing things were different only causes suffering.

My little dog is deaf, so I had to lay on the floor next to him and put my lips against his head when I talked to him. I told him over and over again how much I loved him and how sorry I was that I couldn't be with him every day like I used to. That amazing dog was almost enough to keep me in my relationship with CT forever. Almost.
Posted by Unknown at 8:35 AM 1 comment:

In her song Icicles, Patty Griffin sings "I must confess there appears to be way more darkness than light..."

The world is dark and sad right now. Take care of each other. My heart goes out to everyone who is hurting over the tragedy at Virginia Tech.

Calm, calm, belong
Posted by Unknown at 7:48 AM No comments: 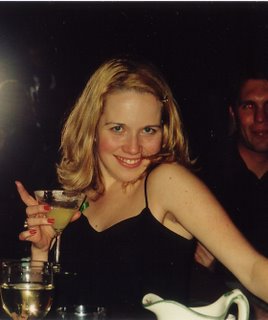 Yesterday, I went to a bridal shower. I imagine this will be the one and only time in my life I ever say such a thing. I'm going to be a bridesman next month for my dear friend, Juju, so I was invited to attend her shower.

Sensing that I may feel a bit out of place, Juju offered me an out. "Toddy, there will be a lot of estrogen at my party. I would love to have you there, but it isn't mandatory."

When Juju and Metro had an engagement party, I was in a dark, dark place and couldn't find it in me to celebrate anything or anyone. Not even the glorious news of a wedding that I had hoped for (and, to be quite honest, campaigned for), so I wasted that day wallowing and drinking. I don't remember what I did or who I was with, but I know that there was a bottle of whiskey involved and most likely a lot of tears. That's what makes it a waste of a day.

So there was no way I was going to miss out on this very special day. Juju has been there for me in a way that few people ever have. Maybe in a way that nobody ever has or ever will be there for me. Our relationship is difficult to explain. It is sort of a "Will and Grace" relationship, except that she is more like the gay man, and I'm more like Grace waiting for Harry Connick Jr. to ride in on a white horse and sweep her off her feet (after she runs straight into a lamppost). Sometimes people think we're married. I think we act more like siblings than a married couple. We used to be roommates, and the stories we could recount from that time of our lives take hours and hours to tell due to the bursts of laughter that accompany the telling of those stories.

Also, we work together every weekday doing basically the same job. We are a two-person department at work in charge of providing technology training for our company. We set up classes and have lunches with vendors and help each other prepare reports. Then we take a break together and go get coffee and gossip and laugh. It seems like we just never get tired of each other.

The bridal shower was held in the beautiful home of our friend Buffy. I would say that her house looks like the pages of a decorating catalog, but that wouldn't be quite accurate because I've yet to see a catalog that beautiful. The food was amazing. Crab cakes and so many cheeses. Olives and breads and shrimp and a hot plate stacked with sweet potato fries. All of this was accompanied by "Till Death Do Us Partinis" (a ginger cosmopolitan) and wine and the highest-pitched talking I've ever heard.

As each gorgeous babe arrived at the party (all of Juju's friends are gorgeous babes), the other women would squeal and hug. I went hoarse from imitating these girly squeals and could barely speak by the end of the party. The women talked about Kate Spade handbags and BCBY dresses. Or maybe I'm thinking of the yogurt place. Was it BCBG?

At some point in the shower, I realized that Juju actually is the "Grace" and I'm the "Will". Her eyes filled with tears as she opened the presents her mother and sisters sent. She cried again when she read a beautiful note from her future mother-in-law. More tears as she opened a tiny box from a dear friend. Inside were the earrings worn by that friend on her wedding day. Juju looked at me and said, "you and I have totally switched roles," and we laughed.

Juju used to rail against being tied down to one person. She loved being single like nobody I've ever met before. I'd just shake my head as she told me how much she loved being alone. Then I'd tell her how much I wanted a partner and would cry as I sniffled about how empty I felt.

Yesterday a friend I haven't seen in some time asked how I was doing and I said, "I'm happy. I'm just so happy. I didn't know how good it feels to be happy until after I went through an awful time." We talked about how important it is to find happiness within yourself. Happiness that isn't wrapped up in someone else.

And so, Juju is thrilled to be getting married, and I'm thrilled to have my own life. I look around my apartment and think to myself, "This is all mine. I don't have to share it with anyone. It's just me," and I feel tingly inside. And Juju receives a set of matching luggage for her and her fiance and gets excited about the honeymoon cruise she'll be on with her husband.

I thought about this when I got home yesterday from the bridal shower. Maybe someday I'll meet a partner. He has a secret name that Juju and I gave him. We're the only two people who know what it is. It's a made up word that describes this soulmate/partner/boyfriend/lover entity better than any real word can. Maybe I will meet him and we'll decide to get married (cause it will be legal someday) and Juju will throw me a shower (with those sweet potato fries please) and she'll remind me of a time when all I wanted was a partner followed by a time when I found contentment in just being alone.

I thought about this yesterday as I walked up the steps to my apartment building where I would spend the rest of the night by myself and said out loud, "I guess you never know..."
Posted by Unknown at 9:28 AM No comments:

I don't want to write about my job. How stupid. Who cares? They give me money for showing up and working. My job has so little to do with my life. But our company expects its employees to live and own our mission. Never, ever do I lay in bed at night thinking about how I will live and own our mission tomorrow. It is my job, not my life.

Whatever. The downside is that I can no longer write blog posts at work. From 9 am to 5 pm I am supposed to just live and own our mission. Fine. I can live with it. While I'm at work I will live and own our mission and never ever blog, because that would be WRONG. I actually really like my job and my company, but I am sad that they see the need to set these new limits. Sometimes the freedom of writing a blog post at work was the only thing that kept me sane. Now I will have to find other ways to maintain sanity.

The good news is that I will only write when I actually have something to say. It is highly unlikely that I will come home from work after a long day of sitting at my computer and feel compelled to sit down at my home computer to spend even more time typing. Nope. Not gonna happen.

Also, Juju is getting married next month. She and Metro will be married at the end of May, just 2 weeks after THP and TMW celebrate their union.

You would think that seeing two of my best friends marrying within a few days of one another might be too much for this lonely single romantic man to handle. But, surprisingly, I am feeling incredibly ZEN about the whole thing.

Tonight as I made macaroni and cheese for myself, and right before I poured a glass of white wine (from a box) and prepared to watch American Idol, I called The Handsome Prince.

"When I get married, I want to have a wedding invitation exactly like you and The Math Whiz sent out. That was amazing and creative and beautiful."

Surprisingly, to me at least, I feel no jealousy in my heart. I envy my friends for their good fortune in finding a love and a soulmate to share their lives with. But, honestly, I just don't think it is my time to have a partner. Someday I know I will be the one sending out invitations. But in 2007, my role is to be the friend who throws a memorable bachelor party. My job is to be a wonderful bridesman to Juju (yep, I'm a male bridesman) and to party with her fiance, Metro, in Vegas next month. My time is coming, but my time is not here.

It is amazing to me that I am enjoying my life as a single man so much that, in spite of all these wonderful weddings, jealousy has found no place to take root in my heart. I never thought I could be this content to be alone. But I am.

I guess I am living and owning the cause. And the cause is me.
Posted by Unknown at 8:19 PM No comments: