One of my very favorite podcasts is The Satellite Sisters. One of the hosts, Monica Dolan, is coming to see Tonya & Nancy: The Rock Opera this weekend. I can't tell you how excited I am to meet her after the show!

If you're interested, here is Monday's show in which the sisters briefly discuss Tonya & Nancy! (Segment begins at 15:50)
http://www.satellitesisters.com/audio/show115.mp3

I've straightened the sisters out on some of the facts of this confusing story. They now understand that Shawn was not, as they say, "the whacker". (I didn't want to steal "Shane Stant's" thunder)
Posted by Unknown at 12:49 PM No comments:

Yes, folks. This little Portland show was covered by CNN.

I'm still trying to let it all sink in. We sold out last night. I'll be surprised if we don't extend the show.

Today is the first day off I've had in weeks. I'm going to take a nap, watch television, probably catch the Oscars, and eat lots of food since I finally got to the freakin' grocery store!

Most importantly, I'm NOT singing today! Life is good.
Posted by Unknown at 9:50 AM No comments:

I've never been part of a show that received so much press. Of course, when Tonya Harding comes to your opening night, there's bound to be buzz.

Have you ever received a standing ovation from Tonya Harding? I have.

I'm trying to post a video here, but until I manage to do so, here's a sampling of news coverage Tonya & Nancy: The Rock Opera has received. 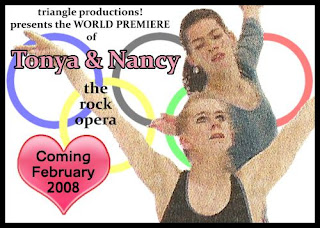 Tonight at 8:00 p.m. the cast of Tonya & Nancy will be rocking the World Trade Center. Our band is awesome. I just hope the audience will be able to hear us singing! I also hope that I don't do anything stupid. Last night at our final dress rehearsal, I accidentally brought a nightie on stage. What happened was.... the actress playing Tonya asked me to bring the wrap-around skirt part of her costume on stage because she didn't have time to put it on backstage. I accidentally scooped up some of the lingerie she wore in a previous scene and carried it out with me. The scene on stage was the 1993 National Figure Skating Championships, and there I was, Tonya Harding's bodyguard, holding a slinky negligee. I threw it on the floor and tried to kick it behind me.

Here is a link to story about the show. Included in the online article is a link to "When You Wake Up Sleeping in Your Car in Estacada", one of the songs in the show.

My cell phone rang at 7 a.m. this morning waking me from a sound sleep. It was Auburn Pisces calling to let me know she had seen me on the news. (A news crew had filmed one of our rehearsals a couple weeks ago so I think that's the footage she saw).

We've had lots of press for this show, and the fact that Tonya is coming to see it tonight is probably a big reason for the hullabaloo.

I need to feel like a clown today because I have been rehearsing for the show and am recording a podcast today. I have not done laundry or gone to the grocery store for 2 weeks, and I doubt I will accomplish either task today either. I seriously need to spend some time reviewing a few of the songs in the show because everything sounds completely different with the band. Rehearsing with a piano sounds nothing like rehearsing with electric guitars and drums. Tomorrow I am back at the office and then rehearsal, and that will continue for the rest of the week. Tylenol PM helps me shut off my brain at night, but I still fall asleep with songs from the rock opera running through my head.

When I have lots of obligations, I start to feel pent up. I want to be free of all commitments. But that isn't a realistic way to live. So I am just going to wear orange and purple together.

Tonya told our director that she would like to have drinks with the cast after the show. We open Thursday!

That is the update for those of you who cared enough to ask. It touches me that people are still out there reading even though I rarely update lately! Thank you!
Posted by Unknown at 11:01 AM No comments:

As the cast rehearses the show, I feel confident that Tonya would approve. There are some very heartfelt moments that will help the audience to see Tonya as the human being that she is.

She made some mistakes. Personally, I wouldn't want my life to be played out in the media the way hers was. I'm sure most of us wouldn't come off smelling like a rose if publicizing our faults made for a good news story.

I'm interested to meet her and am looking forward to performing the show for Tonya Harding. Nancy Kerrigan, I've heard, has said she does not want to be involved in the show in any way.

The next couple weeks before opening night are sure to be a wild ride.
Posted by Unknown at 10:45 PM No comments: 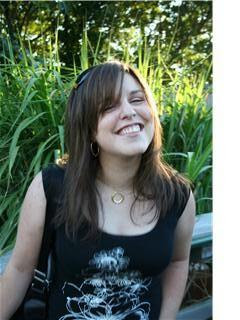 I'm working with an amazing singer/songwriter in Tonya & Nancy: The Rock Opera. Beth Willis has a beautiful voice and writes incredible songs. Please check her out at her website or her MySpace page. Beth is playing Tonya Harding in the show, and she is doing a great job. Audiences are going to fall in love with her.

I'm playing Tonya's bodyguard, Shawn Eckhardt, so I get to spend some time with Beth waiting in the wings. Today she taught me the Star Trek "Live Long and Prosper" sign. She's so cool, and so genuine and kind.

What I love most about theatre is the opportunity to meet and work with talented and inspirational artists. It is good to be back on stage.
Posted by Unknown at 7:33 PM No comments: