Mz Ouiser commented about my dearth of posts, and she's right. I haven't written much, and the main reason is that I am just busy living life, as my friend suggested.

I often question whether it is more important for me to wait until I have time to write an entertaining post (you know - the kind of post that requires thought) or if I should just update my blog for the people who care about what's happening in my life (why?!).

In the way of updates, there's quite a bit going on. I've seen a documentary on the Dixie Chicks, attended a CD release party, watched the Oscars at CC's, and I went to a gathering for this season's new softball league players. I also recorded a podcast with Pony and stayed consistent in my workouts. Oh, and last Thursday night I sang karaoke with The Handsome Prince for the first time in months. We debuted a new duet, "Anything You Can Do (I Can Do Better)" from Annie Get Your Gun.

I did something else last Thursday. I accidentally cancelled my text messaging on my cell phone account. I mean, I made the phone call to Cingular on purpose, and I intended to cancel an extraneous service, but in my enthusiasm to save money I didn't realize I was canceling pretty much every feature on my plan. Basically I changed my cell phone from a functional communications device into a large timepiece.

Nobody could reach me, but I always knew what time it was.
Posted by Unknown at 10:46 AM No comments:

My latest obsessions include Dragostea din tei, the elliptical trainer, The Satellite Sisters and darts.

I could play darts five hours a day and be happy. The Handsome Prince taught me how to play a month or two ago, and I love it. I've only played on the electronic dartboard, but I would someday like to try playing on a classic dartboard with steel darts.

Last night I dropped by CC Slaughters after I finished recording the podcast with Pony. I think people must have worn themselves out on Mardi Gras, because there were only a couple customers there. That's why the Toddtender was able to play darts with me in between serving his customers. He would come over and throw his round of darts, rush back over to the bar to serve patrons, and then come back for more darts.

I don't see Darts listed on the website for Gay Games 2010 in Cologne, so I may have to participate in Softball. However, there is a Climbing event and I happen to live a few blocks away from the Portland Rock Gym. It would be so convenient to train, if I can get the courage to sign up for an introductory class.
Posted by Unknown at 12:07 PM No comments:

Now that Valentine's Day is over, all the nightclubs are gearing up for the biggest party time of the year. You've seen the decorations, I'm sure. And everyone is getting excited for this crazy night of celebration.

Like millions of other Americans, I'm planning on going out tonight to celebrate Presidents' Day in style. I plan on dressing as James Polk. He's my fave.

The Math Whiz is going to join me. He's going as William Taft because "nobody hails him anymore, and it's time for Taft's day in the spotlight".

I had a moment of panic because I worried everyone would, of course, want to go to the bar dressed as James K. Polk. But the Math Whiz reassured me. "Don't be silly! Everyone is going as either Martin Van Buren, or the always good conversation-starter, President John Tyler."

He's right, of course. I get so sick of all the Martin Van Buren wannabes. James Polk kicks quite a bit of ass, so I'm happy that my friend convinced me to stick with my first instinct.

If I can just find my ascot, I can get to CC Slaughters and party like a President! Of all the times to misplace it!
Posted by Unknown at 6:28 PM No comments:

I miss you all the time

I miss you all the time

Maybe I Will "Buy" One 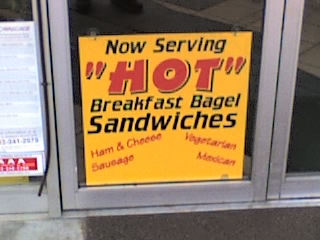 I mean, they're not hot hot.

They're just "hot". These bagels are hot-ish. They are like cold bagels, only warmer. One might almost say they are hot, but not quite. They are just - well - they're "hot".

Now there is no question at all that these are bagels.

And clearly the bagels are intended for breakfast - there's just no arguing that.

One would have to be a complete moron to question for a second that these bagels, stuffed with wholesome breakfast-y foods, form sandwiches.

There is just this teensy tiny problem with committing unabashedly to the use of the word hot in describing said breakfast bagel sandwiches. We're not saying they are cold, though. No, definitely not cold.

Maybe they were afraid someone would sue them. What if my definition of hot was different than someone else's? There could be a trial! I mean, mayber when I purchase a sandwich advertised as hot, I expect to need oven mitts in order to hold it. (There's a look for ya - walking down the street with oven mitts and blowing on your hot sandwich)

So, maybe they are just protecting themselves legally by using the quotation marks.

I saw this place of "business" on my way to "work" today and immediately stopped to photograph their sign. You know what would be a "cool" job? Marketing these breakfast bagel sandwiches.

I would like to stand in front of the shop doing some "advertising" for these bagel peddlers. I would yell, "Come get your 'hot' bagel sandwiches!", and I'd do the air quotes whenever I said the word 'hot'. Maybe I would give people a knowing wink as I did the air quotes.

I think I could draw quite a "crowd", and we would sell "several" of these "hot" sandwiches.
Posted by Unknown at 11:30 AM No comments:

I'm so tired today. At the office this morning I needed to make a couple copies of some financial documents, but I had to wait because the copier was in sleep mode. So, as I'm standing there waiting for the copier to "wake up" I became very irritated. Why does the machine get to nap in between duties? I'm not allowed to sleep at work, and I do not think the copy machine should be allowed to either.

Maybe I am so tired because I've taken a couple days off from working out at the fitness center, which is on site here at the office. I did manage to get to the gym quickly yesterday afternoon, but I only went so I could get some hair product to fix my hair before happy hour.

To be honest, the real reason I'm tired is that I'm irresponsible. Instead of going to sleep last night at a decent hour, I stayed awake until 1 a.m. listening to my new Patty Griffin CD. It arrived yesterday while I was at work, and I had plans that kept me out until almost midnight, but I love Patty Griffin so much I fought to keep my eyes open while I listened to the CD, Children Running Through, in bed. The album is a masterpiece. Up to the Mountain (MLK Song) is incredible and shows off Patty's rich soulful voice, which soars through this song in a way that takes my breath away. Someone Else's Tomorrow surprised me as I listened to the minor key of the opening chords. The song is like nothing I've heard Patty do before. Listen, if you are not already a fan who has discovered Patty Griffin, now is the time!

You can see Patty Griffin tonight on The Late Show with David Letterman. You'll see what I mean!
Posted by Unknown at 12:22 PM No comments:

So today I am suddenly able to post, and I can't think of a thing to say. But I have missed blogging, so I feel I must take this opportunity to write something. Anything.

Tomorrow I am gathering some of my friends together and showing them the Gay Games VII DVD I purchased. Every time I watch it my eyes fill with tears. Some of the athlete stories are so powerful, and the footage of both the opening and closing ceremonies reminds me of the amazing thrill of actually being there.

Work today is tedious. It reminds me of the time I worked as a temp at a large consulting firm and had to spend the day scraping tiny black marks off reports after they came off the copy machine. I guess it was cheaper for them to hire a temp to scrape the ink marks off the page than it was for them to buy a better copy machine.

Once I worked as a volunteer at a Christian music festival in Kentucky. My job was to "guard" the tabernacle (chapel) at night. I was supposed to make sure nobody went inside. The door was locked, and the building was mostly empty except for some folding chairs and a podium. I could not have entered the building if I wanted to since it was locked up tight, but my job was to guard it anyway. I was armed with a flashlight, which I suppose I could have used to hit someone over the head if they tried to break in.

I'm so excited that Pua is coming for a visit next month. She is going to celebrate Auburn Pisces' birthday with us. If you haven't read Pua's blog lately, you should. She's writing again. It makes so many people so happy.

Also, this year I have cooked three things that tasted good. Seriously! I made crab cakes, and I made a low-fat oven "fried" chicken. Then I made some really tasty Brussels sprouts with Parmesan, which was harder than it sounds. Until I became the proud owner of The Joy of Cooking, I didn't realize you were supposed to pull the outer leaves off Brussels sprouts before cooking them. That took, like, an hour. It was almost as tedious as making pancakes. Even if you hate Brussels sprouts, I think you would have liked these. I moaned with pleasure when I put one in my mouth. I never moan with pleasure when I taste my own cooking. I mean, there is usually moaning going on, but it is not pleasured moaning.

Yesterday my buddy Jesse left a comment and told me he missed out on the whole "Hot Toddy was published" story line of last fall. So, just in case there are others who missed it, here is a link to From Boys to Men: Gay Men Write About Growing Up. My story is called "The Lives and Deaths of Buffalo Butt". It is a stark and somber portrait of life from a neo-existential literary view.

Yeah, right.
Posted by Unknown at 9:47 AM No comments: