You make me want to dance!

I finally got around to seeing Brokeback Mountain this weekend, and I just have to say that they should have changed one line. Instead of "I wish I knew how to quit you," Jake should have said, "I wish I knew how to understand what you're saying." After seeing the movie, I finally understand all the fuss over Heath Ledger, but I got so frustrated watching the film that I started yelling at the television screen. I couldn't make out so many of the lines due to the fact that both lead actors mumbled throughout the entire movie. (The whispered muttering scene in the hotel room was infuriating!)

I know, I know. They are cowboys. They are tough. They are cool. But, come on. It is pretty sad when you have to rewind the last line of a movie five times so you can hear it. There I was with tears in my eyes shouting at Ennis, "What? What did you just say to Jack's shirt?! What did you SAY!?!?"

All in all, I enjoyed the movie. But now I agree with the decision to award the Oscar to Crash. I'm sorry to say it. I mean, I enjoy watching two men in love as much as the next guy (probably a little more than the next guy), but I just thought the performances in Crash were stronger, and the storylines were more complex and compelling. Plus, big bonus, I could understand the dialogue without closed captioning. Please don't revoke my gay card. I still think Dolly should have won an Academy Award for best original song.

I realize I am about a year behind in my Brokeback commentary. Reporting old news is what I do best. Here are some of my other hot topics:

3. I think that Tiffany may just be the next Madonna.
Posted by Unknown at 11:15 AM No comments:

I have a friend who is about to become a parent. He's a strong, intelligent, beautiful soul, and he just happens to be gay. Several of my gay and lesbian friends are parents, and I think all of them do a great job with their kids.

The utter nonsense that a parent's sexual orientation has a negative impact on a child's development is a lie. In fact, research shows just the opposite.

Recently I found the blog, Holy Bullies and Headless Monsters, which exposes some of the deceptive practices by so-called "pro-family" research. The blog's author, A. McEwan, is working on a book that details his findings.

If you are a gay parent, or you are about to be a gay parent, I salute you. Seeing the examples of my friends, gay or straight, who take on the enormous task of raising a child makes me want to be a better person.
Posted by Unknown at 12:45 PM No comments: 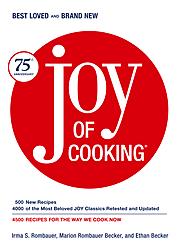 Thanks to this incredibly thoughtful Christmas gift, my whole life is about to change.

1. I will never again have to call The Handsome Prince to ask him if I have to wash ground turkey before I cook it.

2. If The Handsome Prince Hotline can't be reached, I will never again attempt to rescue the chunks of meat I am now washing down the drain, only to pack them into tight hard patties before attempting to continue washing.

3. I won't have to call Juju/Willie/Apollo/The Math Whiz to ask if Tuna Steaks have to be cooked the same day I buy them.

4. From now on, I will know how long it takes to hard-boil an egg. My old method was to just wait until the shell exploded and egg started poking out.

5. I won't try to use thin-sliced deli meat when a recipe calls for a "cutlet" which, to my surprise, does not mean "little slice".

6. When bringing a dish to a party, I will be sure to prepare something edible. Now that I know sweetbreads are the thymus or pancreatic glands of a young animal, I won't try to make sweetbread cinnamon rolls for a formal brunch.

8. Chives, shallots and scallions will no longer be interchangeable in my recipes as, once again to my great surprise, they are not the same thing.

9. I won't have to try to figure out the metric system before cooking Canadian Bacon.

10. Cooking may become a joy for me. Or at least not such a daunting and herculean task.

Thanks for the gift, Ms. Karma, which you gave me after I confessed to you that I couldn't hard-boil eggs.
Posted by Unknown at 2:46 PM No comments:

Nice Blog Ya Got There

Hey, I just found another blogger in Portland, and I am really into her blog, so I thought I'd let you know about Lelo in Nopo.

It has been a while since I stumbled across a new blog and spent 10-15 minutes poking around. I usually just read a post or two and then surf away, but something about her writing and photos really drew me in.

Lelo invited me to this really cool party on a bus that goes underwater. God I love my weird hometown of Portland.
Posted by Unknown at 11:24 AM 3 comments:

I really like Portland weirdness. The fact that we have a doughnut shop where you can take free Swahili lessons makes me smile.

Once a year, over a thousand Portlanders and visitors flock to the Red Dress Party to raise money for charity.

The first time you see Extremo the Clown driving around in his art car is the Portland version of experiencing your first kiss.

One or two naughty Santas almost ruined the night. The award for the dumbest Santa in the world goes to the moron who fired off a bottle rocket in the middle of the nightclub. He was promptly removed from the bar, but his legacy of stupidity lives on.

One Santa chick came up to me and said that her friends voted on the person in the bar most likely to buy her a drink. Of course they picked me. I'm like Jesus, only nicer. In this case, though, I told her I was not allowed to buy strangers drinks. She was shocked, but my story was true. I've been reprimanded by the bartenders at CC Slaughters for buying drinks for people I don't know, and I'm not allowed to do it anymore. I think the reason for this rule is two-fold. One, the bar doesn't want to encourage freeloaders. Two, they're watching out for me. I seem to have the word "gullible" printed on my forehead, and they know that I have a weakness for a good sob story. To clarify, I am allowed to buy you a drink if I like you or if you're cute or if you're my friend. Santa chick was not my friend, nor was she particularly cute. She also had bad breath, so if I had purchased a drink for her it would have been something minty. Something like peppermint schnapps or a mojito.
Posted by Unknown at 10:56 AM No comments:

Remember the season cliffhanger when Agent Sydney Bristow woke up on the streets of Tokyo and had lost two years of her life and we thought we'd die waiting for the fall season premiere? Last night's episode of Heroes was worse, because there were at least five huge cliffhangers, and we have to wait until January 22 to find out what happens. I shudder to think what the shows writers are going to do to us just before summer reruns!

If you haven't watched the show, I hope you'll find a way to catch up now and get ready for January. You can download it or watch it on iTunes, and the SciFi channel also reruns episodes. Seek it out. You'll be glad you did!

I'm on a heroic journey of my own lately. Last night for dinner I had a vegetable soup that I made myself. I think if I tackle the whole soup/stew genre first, I can work my way up to actually using my oven someday. I also lost a couple more pounds, so that makes a total of 17 pounds lost in the past few months. In January I'm going to go back to weight training in preparation for softball season, but my focus right now is serious cardio. I'm walking an average of 20 miles a week in addition to doing cardio at the gym, so I hope I'll fit into my superhero costume in time for the next new episode of Heroes.

Posted by Unknown at 9:50 AM No comments: